skip to main | skip to sidebar

It’s cold and it’s rainy, here in the Bay Area, and I’ve just gotten out my down parka. That means it must be winter. Oh wait, it’s sunny and beautiful, open the windows.


On the one hand, seedlings are germinating like crazy, and native and naturalized edible greens are starting to be at their succulent best. That also sounds like spring. On the other hand, most of the deciduous trees and shrubs have dropped their leaves. Sprinter, or Wring, let’s just take it day by day. 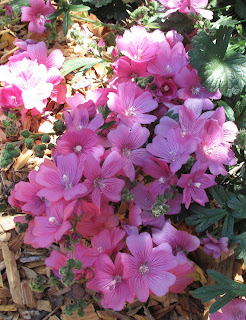 A perennial ground-cover that offers glossy-green round leaves and stunning deep pink to light pink flowers (in real spring), it has become my favorite green this year. In the mallow family, Pt. Reyes Checkerbloom, Sidalcea calycosa ssp rhizomata, is endemic to the Pt Reyes peninsula, yet does very well throughout the Bay Area, in full sun at the coast and part-sun or shade elsewhere.


In its natural habitat, it likes seeps and springs, high water tables, even vernal pools. But it is quite adaptable to my regular garden regime of almost no work.


It’s amazing that one plant could have so many virtues. Everybody likes a nice groundcover, one that covers the ground without being obnoxious about it, maintaining a fresh green color most of the year. (It could be all through the year if you water, but why not give it a rest, for the sake of our water supplies, and the joys of accepting California’s seasons). The bright pink flowers are abundant and show up for months.


As if this weren’t enough, as I discovered when casually chopping it up and adding it to a tomato salsa, the leaves are easy to like. No boiling or changing of the waters is needed, for there is no bitter principle. A slight hairiness appears as the season wears on, and perhaps the leaves toughen a bit. But raw in a chopped salad or steamed or boiled, it’s mild, tasty, and requires NO care.


In the garden, I make a point of nibbling on it whenever I pass.


Other mallows, like Sidalcea malviflora, are also edible, but the leaf is less substantial; more will be required, and where I live, I’ve never seen them in enough abundance to feel that I could harvest them. Unlike the Pt Reyes checkerbloom, the upright checkerbloom goes completely dormant and is reappearing with the….spring, winter, December…..anyway, now.
Posted by Judith Larner Lowry at 10:58 AM No comments: Last week, we served Yerba Buena Tea to attendees at the Heirloom Expo in Santa Rosa, and I was impressed anew by the subtly pleasing qualities of this easy-to-make tea from the California native groundcover called Satureja douglasii. This wonderful little plant from the mint family grows under oak trees, where it is said to be difficult to find plants that survive, especially if you follow the rule to avoid watering out of season under oak trees. This rule is important because some diseases attacking oaks come from the unCalifornian combination of moisture and heat, which is not normally occurring in a Mediterranean climate like ours in California. Actually, I think it's easy to garden or plant under oak trees, but that's another topic.
Yerba buena also can be found thriving at the edge of chaparral and coastal scrub, making a lovely neat chartreuse edging along paths and trails. In the early days of our 30-year-old Larner Seeds Demonstration Garden in Bolinas, I couldn't get yerba buena to do well. Now that "things," and by "things," I mean the many qualities of shade and sun and soil that have developed through the years, have changed, it takes off and seems to do well everywhere we put it, except where outcompeted by native blackberry.


So I have lots of material for tea-making. For a crowd, I use approximately two masses or clumps of stems and leaves that would fit in both my hands to make a 4-quart stockpot full of tea. This is always a matter of taste, but I prefer it rather mild. Rinse it off and remove oak leaves that seem to always be caught in it and pour boiling water over it. Let soak for ten or fifteen minutes. I've also let it soak for a very long time, up to 12 hours, to make a concentrate, such as for bringing to the Expo. Once there, I diluted the one quart of concentrate with two to four gallons of filtered water. I also like to put some sprigs of yerba buena into my drinking water at the beginning of a hike.
It is so refreshing in its mild way, having nothing to do with caffeine, and it seemed to be greatly appreciated by thirsty Expo-goers. One sampler called it "amazingly hydrating." When frequently asked about its medicinal qualities, since it seems we can't be bothered drinking something without a confirmed health benefit, I repeated the simple instructions given us by Milton "Bun" Lucas, Pomo Indian, who is no longer with us, but who left many of us with treasured information. Bun said that he saved it for special occasions so as to retain its efficacy, using it for colds, or, as at the Expo, for times of unusual demands, which could describe a fair of 20,000 people. That was the pre-estimated number, though I, of course, didn't serve yerba buena tea to that many people.


But I almost could have. 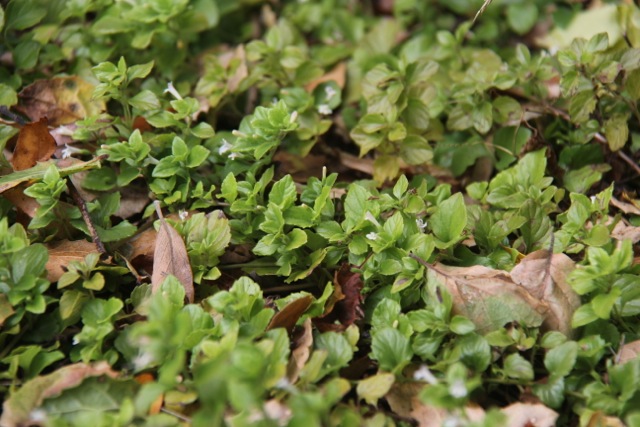 Posted by Judith Larner Lowry at 9:08 AM No comments:

Camas is one of the most important indigenous root foods, covering many hundreds of thousands of acres throughout the west, from Montana to California, both in the Sierra, on the Modoc plateau, and even occasionally on the coast. Where it still flourishes, it is easily glimpsed in spring, when it turns the fields and prairies a glorious rich blue-purple color.

It likes areas that are seasonally wet, drying out by late spring. It grows in wet meadows, swales, annual floodplains, and along ephemeral creeks, in sun or part-shade, and is found from two to eight inches below the surface.

Like other edible members of the lily family, it was harvested in such a way as to allow for its enhanced and continued flourishing. The large bulbs, from 1” to 2.5” in diameter, were removed to be eaten, while the smaller bulbs clinging to its sides were replanted in the loosened soil to grow into next year’s harvest. Digging sticks used for the purpose were excellent at churning the soil and avoided the danger of destroying the bulbs while digging, which can happen with a shovel or trowel.

A dense bulb with layers like an onion, camas contains inulin, a starch that is difficult to digest. Indigenous peoples were masters at the art of converting this substance to the digestible fructose, through long, slow cooking in an earth oven, as long as 36 hours but at least for two days. At this stage, the bulb starts to caramelize and turn brown, becoming very sweet in the process. Eating it before it turns brown may cause indigestion.

In the absence of earth ovens, try a “slow-cooker.” Remove the thin dark outer skin and place them in a steamer in the cooker, or in the oven at 220 degrees, adding water to reach the bottom of the steamer. Cover and cook for 12 hours, then remove, salt, and fry in olive oil. Or let cook for the recommended 36 hours, adding water as necessary.

For a luxurious dessert that reminds me of the E. Indian dessert called ras malai, I found a way to shorten the cooking time by boiling the bulbs for 30 minutes in water and then cooking them with cream and a small amount of sugar for 2 hours, stirring occasionally. Use a pan large enough that it won’t boil over. Add rosewater and sweetener to taste. The bulbs become soft
and almost disappear the longer you cook them, thickening the pudding and adding a delicious taste. None of those of us who ate it experienced indigestion.

Camas is well worth growing at home, where you can become good at identifying its flowers and seed stalk. Note that it occasionally grows with another bulb that is toxic, called “death camas,” Toxicoscordion venenosum, which fortunately has very different white flowers, so only harvest from the wild if the flower or seed stalk is still attached and you are practiced at identification. The seed stalk is quite distinct in appearance, but never take a chance.

A home harvest provides flowers, safe and delicious meals, and a chance to connect with a root-food rich in history and association with this continent’s humankind.

Posted by Judith Larner Lowry at 2:37 PM No comments:

Ethnographies of the Past

An interesting quote from David Prescott Barrows, who wrote “Ethnobotany of the Coahuilla Indians” in 1900. He was describing the territory of the Cahuilla of southern California, who lived in a land much of which was desert, but many different kinds of desert:

“There was really an abundant supply of wild food, far more than adequate, at nearly all times of the year, for the needs of the several thousand Indian inhabitants of former times, although hardly a score of white families will find a living here after all the Indians are gone.”

He goes on to say, in this elegant treatise, “And the secret of this anomaly lies in the fact that the
Indian drew his stores of food from hillsides and canons, where the white man looks for nothing and can produce nothing.”

His ethnograph is one of my favorites, if not the favorite, for his poetic and insightful writing as well as the information that is found nowhere else. If only people like Barrows had been available to write about all the different regions of California.

We’ve been working very hard on a new edition of our booklet “The Real California Cuisine,” which will be available in a few weeks. I couldn’t resist including some of my favorite quotes from ethnographies of the past. We’ve added new species, including my favorite, Yampa, Perideridia kelloggii, whose tubers are so delicious, even raw.

Posted by Judith Larner Lowry at 1:31 PM No comments:

Judith Larner Lowry
Bolinas, California, United States
For the last thirty years, I have been the sole proprietor of Larner Seeds of Bolinas, specializing in California native plants and seeds.
In 2000, I published my first book with University of California Press, Gardening with a Wild Heart: Restoring California's Landscapes at Home. My second book, The Landscaping Ideas of Jays: A Natural History of the Backyard Restoration Garden, was published in April, 2007.
In 2005, I won the John Burroughs Association Award for Best Nature Essay. Our coastal scrub Demonstration Garden here at Larner Seeds is 24 years old. Please visit www.LarnerSeeds.com for more information on native wildflowers.